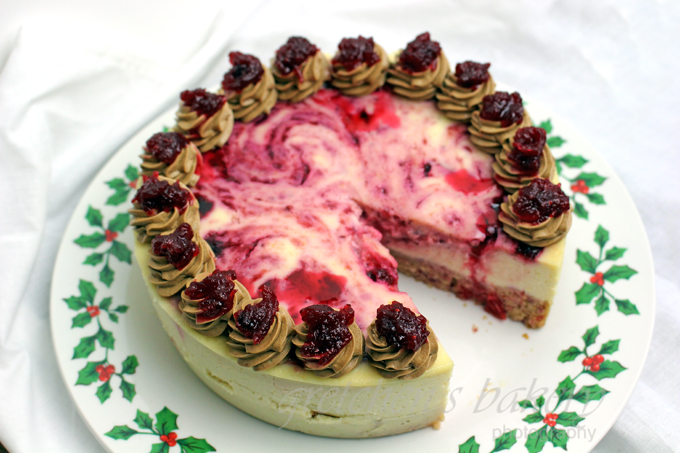 If Christmas had a flavor all to itself, it would be this Vegan Cranberry Cheesecake!

But since it’s now February and the weather still wants to play frozen tundra, why not keep the cranberry theme going right into Valentine’s Day!?

Cranberry cheesecake is a recipe that I make every year during the cold winter season when cranberries are aplenty.

Somewhere along the line though, I started to modify the recipe and /or the look and it.

And it has become sort of “a thing” that I do now every year with this recipe.

Not to say that one is better than the last but for some reason the versatility of the cheesecake recipe lends itself to easily changing up the way I use the compote and what kind of base I choose to bake the cheesecake on.

Sometimes I use a pressed cookie crust, like in my original gingersnap crust for my 2016 version, and other times I use a cake base like this cranberry sponge here.

It all really depends on what you prefer!

I am in love with this combination of tart and sweet cranberry compote spiked up with anise, cinnamon sticks, orange and vanilla; all marbled through the creamiest New York Style Cheesecake you will ever meet!

My original rendition of my very first vegan cranberry cheesecake is below; but as you can see since 2016 I have come a long way! 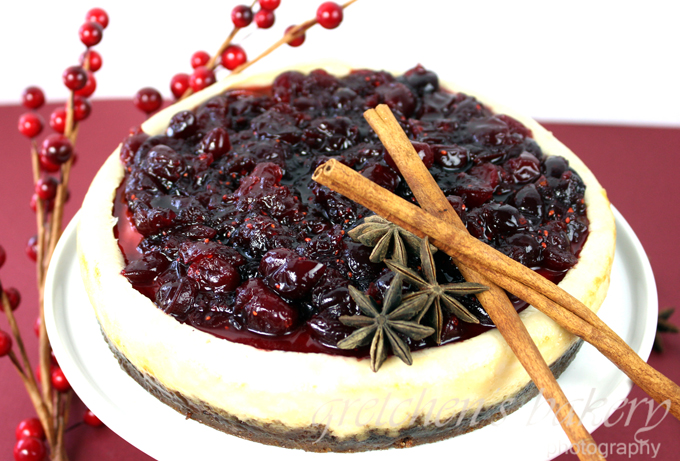 Especially in the vegan cheesecake game!

My recipe for homemade cranberry compote for the topping has not changed.

However my base recipe for vegan cheesecake has been perfected and I cannot say enough about it!

This is the perfect rendition of a New York Style Cheesecake is right here!

This time on a base of spongy cranberry cake with a decorative topping of mocha buttercream! 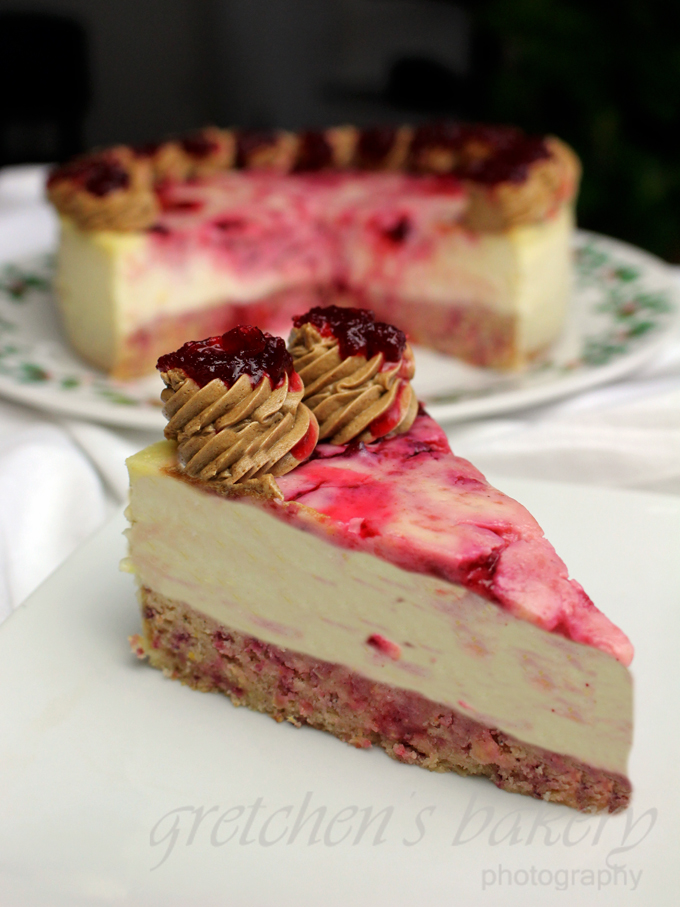 For a lighter and less fat cheesecake I use a blend of vegan cream cheese & tofu together (*See notes in recipe section).

But for a firmer cheesecake that is closer to a truly dense NY Style Cheesecake I go 100% vegan cream cheese!

I always use Tofutti Brand Cream Cheese (not sponsored) for my baking since that was the only one readily available to me since my start into vegan baking.

But this time I opted for the more expensive Violife brand cream cheese with disastrous results!

All caught on camera as you will see if you watch the full Youtube video tutorial.

If you want to check out the full YouTube tutorial for this recipe (and recipe failure!) click this link! 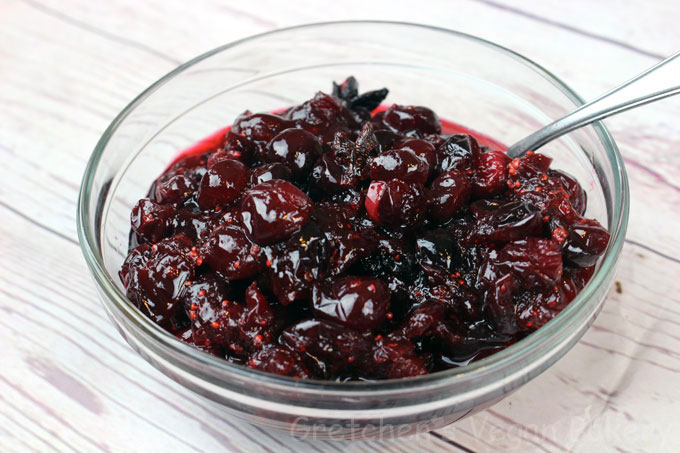 Believe it or not, the homemade cranberry compote is actually the showstopper here!

Without that, well you have an amazing cheesecake but the cranberry compote spiked up with orange, anise, cinnamon and vanilla is really what makes this cake a winner!

Below I have listed both recipes.

The original 2016 version, where admittedly I did not know half about vegan baking as I know now, but it does have much less ingredients and tastes great!

It is definitely more in line with the dense NY Style Cheesecake I keep yammering on about! LOL 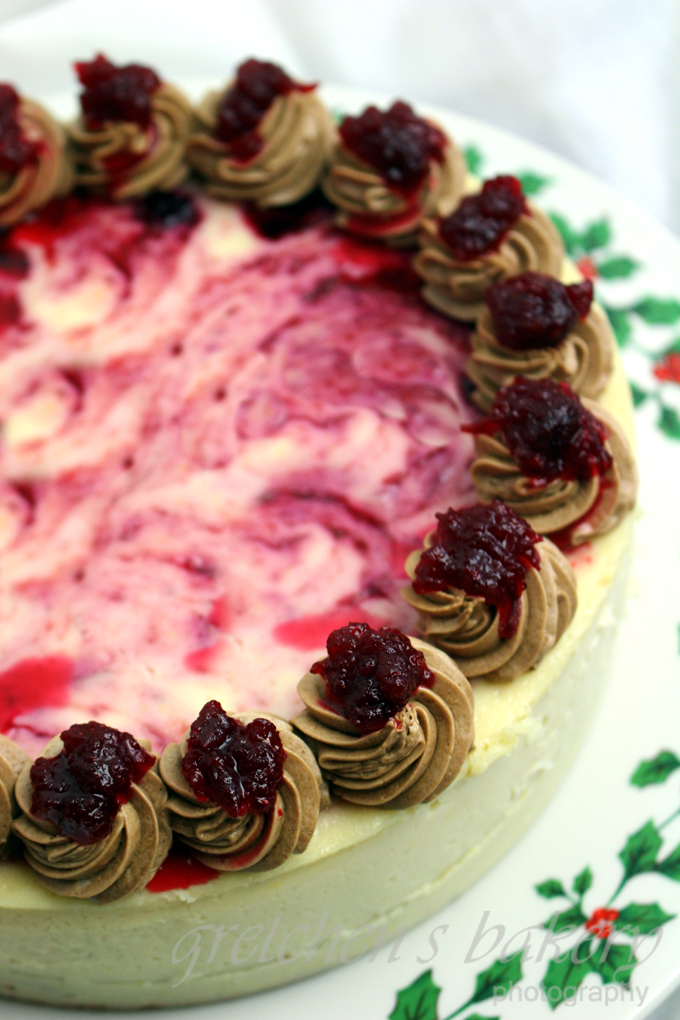 For more amazing recipes using my homemade Cranberry Compote check out these links! Print
Prep time
45 mins
Bake time
1 hour
Total time
1 hour 45 mins
Below I am using all vegan cream cheese as the base recipe, but for a lighter version and less fat replace 1-8oz package of the cream cheese with 7 ounces (half a block) of firm tofu *not pressed
As noted in the blog post I use Tofutti Brand Cream Cheese- watch the video for WHY!!
I like adding that small addition of The Plant Based Egg by Freely Vegan for added structure and creaminess, but you can leave it out with no changes for fine results
Serves: serves 8-10
Ingredients
Instructions
3.5.3251 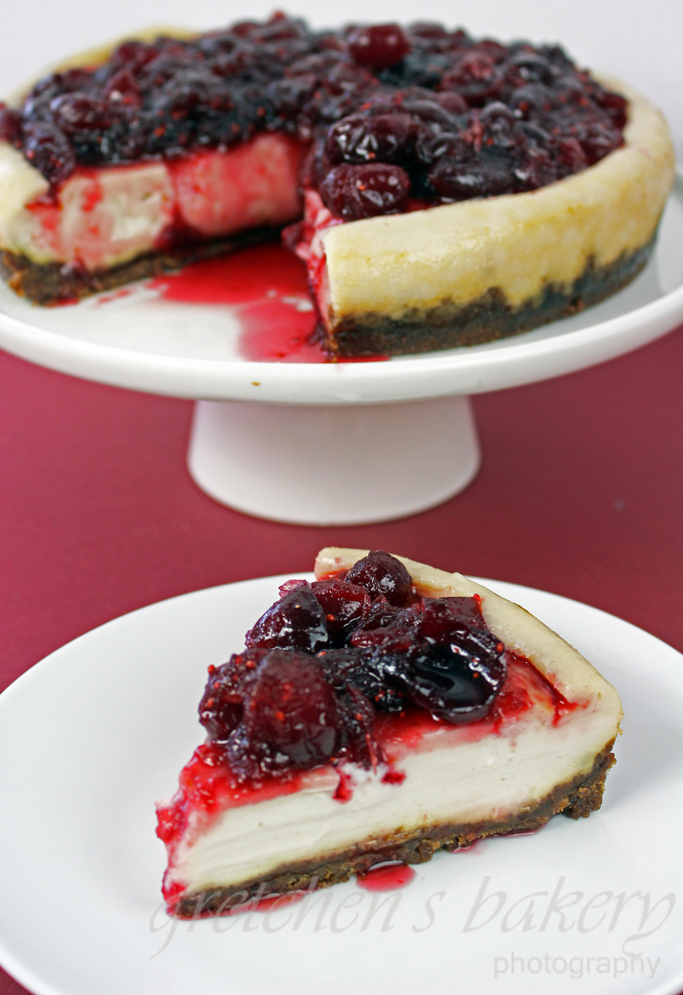 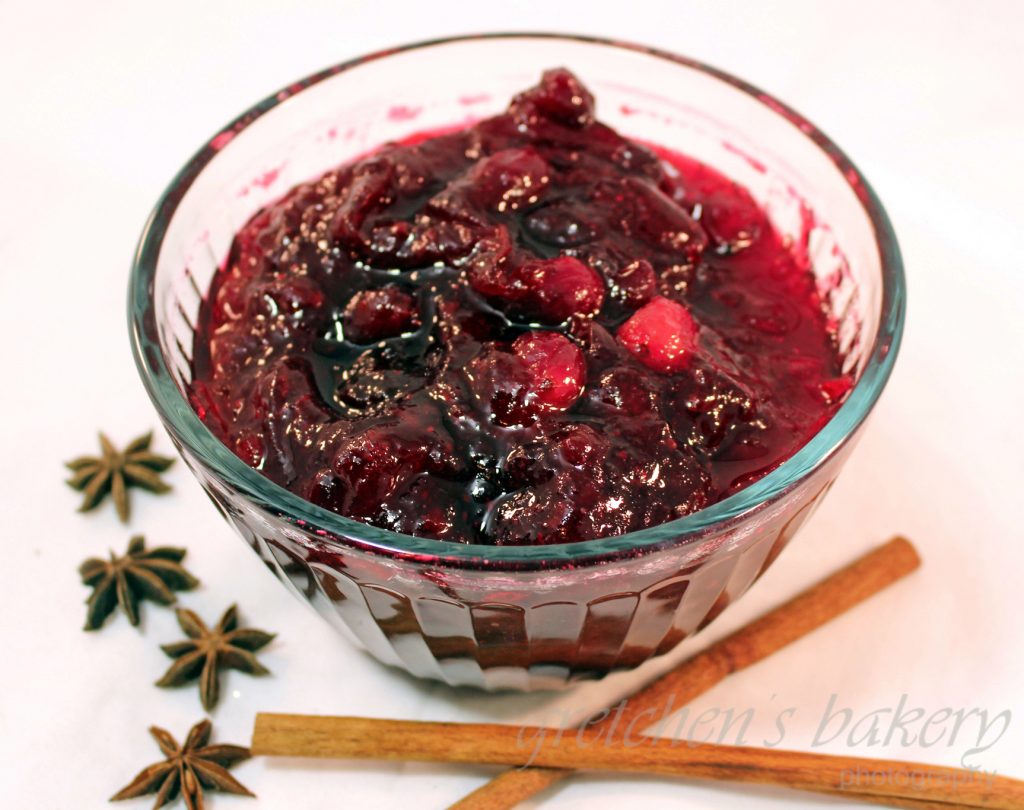